The Allworld Exhibitions Alliance, whose Asian event experience includes the giant CommunicAsia/ BroadcastAsia shows in Singapore, is rescheduling its first major telecoms event in Myanmar, to accommodate the growing interest in the market and facilitate the network roll-out plans of the major operators.

Myanmar, formerly known as Burma, has a population of nearly 60 million people yet telephone penetration levels are among the lowest anywhere in the world. With mobile users thought to be at around 10% and internet and fixed line usage in the region of 2% – but with a Government target of 80% by 2016 – the market offers unequalled opportunities.

“We are tremendously excited to be offered the opportunity to stage this event at such a critical time in the development of telecommunications across Myanmar,” said Overseas Exhibition Services Ltd and Event Director, Rupert Owen.

“The Government has already shown its commitment with the granting of two mobile licences and this is sending a strong message to the world that Myanmar is committed to infrastructure development on a truly massive scale. Several other developments are also likely to become reality during 2014 and this will fit ideally with an event date later in the year.”

The CommuniCast Myanmar 2014 show is being staged at the Myanmar Convention Centre in Yangon from 18-20 November and is expected to attract more than 80 exhibitors. The venue will offer two levels of exhibition and conference space and the show has been welcomed by Than Htun Aung, Government Director of the Posts and Telecommunications Department.

“The Ministry of Communications and Information Technology is delighted to support the first CommuniCast Myanmar event. In this regard, the Ministry invites global mobile and network operators, telecoms and IT suppliers from around the world to showcase their latest technologies, combining with solutions to take the country’s communications industry to the next level,” he said.

Details about the event can be found at www.communicastmyanmar.com. “This show is the platform for the industry to get involved in one of the last great largely untapped markets; more than 30 companies from the satellite, cable, network optimisation and energy infrastructure sectors have already committed to the show,” added Mr Owen.

Allworld Exhibitions is one of the world’s leading groups of exhibition organisers, specialising in Asia and the Middle East. Through its affiliated ASEAN offices nine industry business trade shows have been announced to be staged in Yangon in 2014. 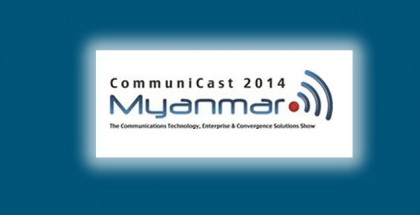 Myanmar Moving Towards ‘Satellite Sovereignty’ Following the Success of the ... December 11, 2014 | Editor