P-Laser is the first high-performance, eco-sustainable cable for electrical grids. Made with recyclable raw materials, P-Laser helps to reduce the environmental impact of electrical grids while increasing their efficiency and transmission capacity. High Voltage P-Laser maintains the same properties of efficiency, compatibility with the existing grid and lower environmental impact. In fact, the cable can operate at temperatures above the typical 90° C of traditional XLPE technology, while the materials used for the protective sheath, the metal conductor and the outer cable screens are fully recyclable.

The 150kV, 5 km link realised in Lacchiarella, near Milan (Italy), owned by Terna SpA, represents a fundamental step in the reorganisation of the high voltage transmission grid in the south-west area of Milan, that will allow connections to be optimised under a medium-term programme. PryCam has been installed at the two extremes of the approximately half-kilometre long P-Laser section. This new instrument, developed by Prysmian Group, allows any pulse signals generated by partial discharges to be monitored and accurately measured, thereby preventing failures and the related costs, by monitoring the different parts of the electrical grid without having to switch it off.

“The development of the High Voltage P-Laser cable follows the introduction on the Italian and international market, started some years ago, of Medium Voltage P-Laser. Thanks to this Prysmian Group is more and more engaged in partnering with the utilities in upgrading and developing their electrical grids while seeking to reduce the environmental impact of such grids,” explains Fabio Romeo, Executive Vice President of Prysmian Group’s Energy Business. “In coming years we will see a radical change in the way that the global electrical system operates, offering many benefits to all users in terms of efficiency, quality and safety of supply. High-performance cables and smart monitoring instruments are a key part of this modernisation process, in order to ensure better risk prevention, grid load optimisation and low environmental impact.”

After receiving IMQ certification in Italy and being approved and adopted by Italian utilities, the Medium Voltage P-Laser cable has also been introduced in other European countries like The Netherlands and Spain, where production or marketing has already started and is delivering promising results. 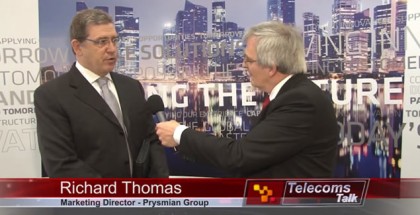